"Promoting a strong economy and high quality of life for our Chamber members and the Cross Plains area communities."

Map of the Black Earth Creek Year 2000 Land Use Map

Map of the Black Earth Creek Future Land Use Map

Interested in Kayaking the creek?  Check out the articles below for information. 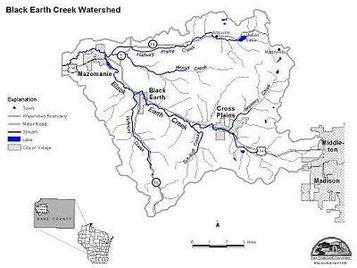 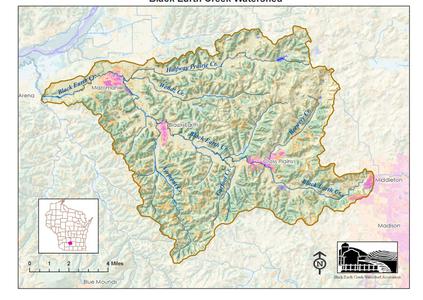 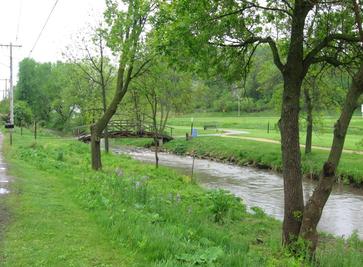 Flowing through the Village of Cross Plains are the spring-fed headwaters of the world renowned Black Earth Creek, a Class 1 trout stream that attracts fly-fishers and other anglers from throughout the Midwest.  It begins as a coldwater spring just west of Madison, and empties past Mazomanie into the Wisconsin River. It offers cool, clean, and very clear water meandering through wooded and prairie surroundings. The creek is banked by beautiful bluffs that create the Black Earth Creek valley. Black Earth is full of insect life and forage fish, and at times can produce prolific hatches throughout the trout season.

15000 years ago the glaciers that covered Dane County began to recede under a warming climate.  As these glaciers melted torrents of cold water flowed west from these tremendous ice sheets.  This water formed a very large series of braided streams that filled the entire present Black Earth Creek valley.  These sediment laden braided streams were the first Black Earth Creek in which mastodons and mammoths wet their feet.

Slowly as the glaciers continued to retreat, the flow west slowed and Black Earth Creek became a single water body.  Through the centuries the climate continued to change; lush prairie grasses and oak savannah established themselves.  Mastodon and mammoths disappeared as they followed the retreating ice sheets.  Over time, bison and elk would next wet their feet in the creek.

A few hundred years ago as white settlers arrived, things began to change.  The oaks were cut for fuel, prairies plowed for farm fields and bison and elk eradicated.  The creek continued to hold its own but the surrounding landscape changed as paved villages developed along its banks.  In Cross Plains, some 50 years ago, one of mans “improvements” was the straightening of a portion of the stream.  This segment has been identified as the nursery of the stream where much of the natural reproduction occurs.  While the straightening of the stream did not stop all reproduction, it did not help.  It seems trout prefer their reproduction chambers to meander and have gravel bottoms.

Recently the meanders and gravel bottoms have been restored to an 800 foot section of creek in the heart of Cross Plains.  While it will be several years before the stream is entirely rehabilitated, it is widely expected this work will improve the health and happiness of the trout population.

Today Black Earth Creek is not as big as it was 15000 years ago.  It is not as ecologically diverse as it was 300 years ago.  It is, however, a much better trout stream than it was 1 year ago.  The man made riffles and clean gravel beds are a tremendous improvement over the straight segment that had been there for over 50 years.  With the planned improvements in stormwater management and the addition of park amenities (paved bike trails and grassed shorelines) the creek will provide a quality habitat for both trout and people for years to come.